The Taj Mahal is widely considered one of the most beautiful and romantic buildings in the world, but there are probably a few things you don’t know about India’s most ornate mausoleum. 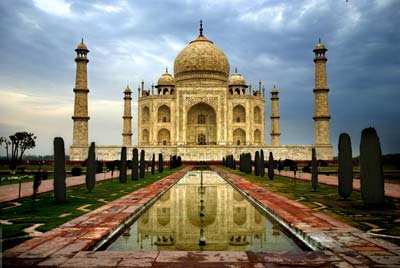 1. THE TAJ MAHAL WAS BUILT TO HONOR THE FAVORITE WIFE OF AN EMPEROR.
Like many of his predecessors, Shah Jahan married several wives over the course of his adult life. Although Shah Jahan spread his heart around, none of these ladies found quite the same favor as his third wife (but first love), Arjumand Banu Begum, more famously known as Mumtaz Mahal. Their union lasted 19 years and led to the birth of 14 children. Complications during the birth of the final child led to Mahal’s untimely passing at the age of 39. Shah Jahan was so stricken by the loss of his longtime companion that he decided to memorialize Mahal with a spectacular tomb. Construction on the Mahal and its surroundings began in 1632, one year after her death, and continued for just over two decades.

2. THE ONLY PART OF THE MAUSOLEUM THAT IS NOT ORNATELY DECORATED IS THE ACTUAL GRAVE.

Per Muslim law, graves cannot be adorned with elaborate decoration, which would be an inappropriate expression of vanity. This rule explains the comparatively drab design of the lower level of the palace where Shah Jahan laid his wife to rest.

3. THE GRAVE SITE IS ALSO THE ONLY PART THAT IS NOT PERFECTLY SYMMETRICAL.

The Taj Mahal is any obsessive’s dream, with meticulous symmetry across its long and wide diameters. The sole exception to this otherwise uniform aesthetic scheme lies, again, in the gravesite. Mumtaz Mahal’s casket is located in the exact center of the palace crypt, but it is Shah Jahan’s gravei ntroduced to the mausoleum following his death in 1666 that rocks its artistic equilibrium with a west-of-center resting place. 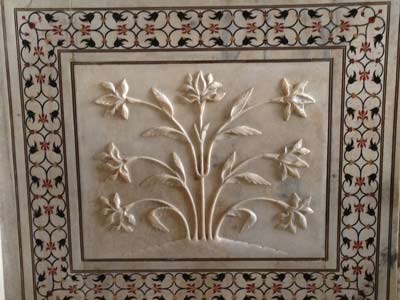 4. THE PALACE WAS DESIGNED SO THAT EVERYTHING WOULD FALL AWAY FROM THE TOMB IN THE EVENT OF A COLLAPSE.

The placement of the Taj Mahal’s four minarets the 130-foot-tall spires at the edge of the platform was not an aesthetic choice but a strategic one. In the 17th century, it was hardly uncommon for massive architectural ventures to fall victim to their own weight. In order to protect the crypt of Mumtaz Mahal, chief architect Ustad Ahmad Lahauri tilted the towers slightly so that they would fall away from the rest of the Taj Mahal, preventing the grave from incurring any damages.

5. THIS KIND OF COLLAPSE REMAINS A VERY REAL CONCERN.

The passing years have only heightened worries about the monument’s structural integrity. In the 20th century, surveyors began to notice signs of structural decay that originated with the neighboring Yamuna River’s gradual drying. Scientists have even observed that between the 1980s and today, one of the minarets has undergone a one-and-a-half-inch shift. More extreme assessments of the situation predict that the Taj Mahal will collapse entirely by 2016, but the Architectural Survey of India has dismissed such projections and promised that the iconic building will be secure for the foreseeable future.

Architect Lahauri led a team of 20,000 artisans in the development of the Taj Mahal. 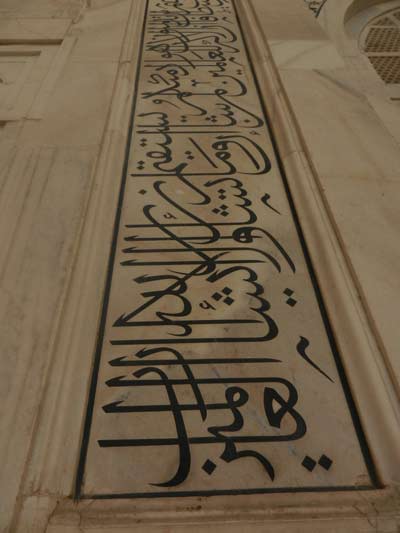 8. THE TAJ MAHAL’S CALLIGRAPHER SIGNED HIS WORK WITH A SELF-DEPRECATING TITLE.

Countless beautifully printed lines of Muslim scripture line the walls of the Taj Mahal, each of which was transcribed from the Quran under the supervision of head calligrapher Abd-al Haqq, known professionally as Amanat Khan Shirazi. Abd-al Haqq also received attribution for his calligraphy, an exceptionally rare opportunity for the era. Ever the humble gentleman, Abd-al Haqq inlaid his John Hancock with the humble, “Written by the insignificant being, Amanat Khan Shirazi” at the base of the interior dome.

9. THERE IS ONE WALL IN THE TAJ MAHAL THAT VISITORS KEEP PUNCHING.

As a centuries-old mausoleum with both cultural and religious significance, the Taj Mahal has attracted a bit of a supernatural reputation. Among the more popular legends is one that involves spurt of water rushing forth as a result of hitting a carving of the palace located in the riverside forecourt. More specifically, the myth provokes visitors to strike the image at the silhouette of the finial the cross-like structure at the very top of the Taj Mahal. Farfetched as it is, groundskeepers find consistent evidence, in the form of superficial damage to the carving, that visitors slam their knuckles against the wall

10.SHAH JAHAN WAS NOT PERMITTED TO ENTER THE TAJ MAHAL DURING THE FINAL YEARS OF HIS LIFE.

Nine years before Shah Jahan passed away, he fell gravely ill, which led to his sons fighting over succession. When Shah Jahan unexpectedly recovered, it was already too late. Two of his sons with Mumatz Mahal, Dara Shikoh and Aurangzeb, had begun fighting. Shah Jahan sided with Dara, but Aurangzeb emerged victorious, killing Dara and imprisoning their father in Agra to undercut any attempts to return to power. Thus, Shah Jahan was barred from visiting the Taj Mahal for the remainder of his life and was only allowed to view his monument from the grounds of his neighboring residence.