The Mystery of Bermuda Triangle..

The Mystery of Bermuda Triangle….

The Bermuda Triangle (also known as Devil’s Triangle and Devil’s Sea) is a nearly half-million square-mile area of ocean. This area is noted for a high incidence of unexplained losses of ships, small boats, and aircraft.

It is a triangular shaped area in the North Atlantic Ocean, from Bermuda Island to Miami, USA and Puerto Rico. Hundreds of people and numerous boats, ships and planes have disappeared inside this triangle. Reasons given for these disappearances vary from scientific to sheer myth.

The first person to report about Bermuda Triangle was Christopher Columbus. He wrote in his journals that inside the triangle, the ship’s compass stopped working and he also saw a fireball in the sky.

The Bermuda Triangle is not small. In fact, it is quite large and covers an area of 440,000 miles of sea. This is larger than the combined area of Rajasthan, Madhya Pradesh & Maharashtra. 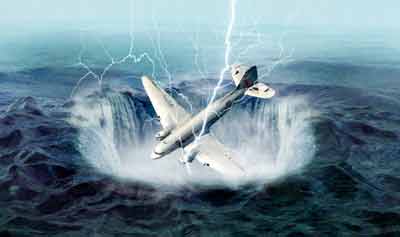 The Bermuda triangle became famous overnight as a result of the Flight 19 incident in 1945, wherein a group of US fighter planes mysteriously disappeared from this area, and the aircraft which went as a part of the search operation met with the same fate. What followed was a series of disappearances of aircraft and ships of all shapes and sizes, which left people wondering as to what was wrong with this region.

At least 1000 lives are lost within the last 100 years. On average, 4 aircraft and 20 yachts go missing every year.

1. Methane Gas trapped under the sea floor can erupt, as a result can lower the water density and cause ships to sink. Even planes flying over it, can catch fire and get completely destroyed during such gas blowout.

2. Sargasso Sea is an area in the triangle that has no shores and bounded by water currents on all sides. The ships passing through it have been stranded and made motionless.

3. Electronic Fog, a strange thick cloud appears from nowhere and engulfs a ship or a plane. Instruments begin to malfunction, and finally the ship or the aircraft vanishes without a trace.

Triangle writers have used a number of supernatural concepts to explain the events. One explanation pins the blame on leftover technology from the mythical lost continent of Atlantis. Sometimes connected to the Atlantis story is the submerged rock formation known as the Bimini Road off the island of Bimini in the Bahamas. Other writers attribute the events to UFOs or unexplained forces.

Numerous official agencies have stated that the number and nature of disappearances in the region is similar to that in any other area of ocean and is just a coincidence.